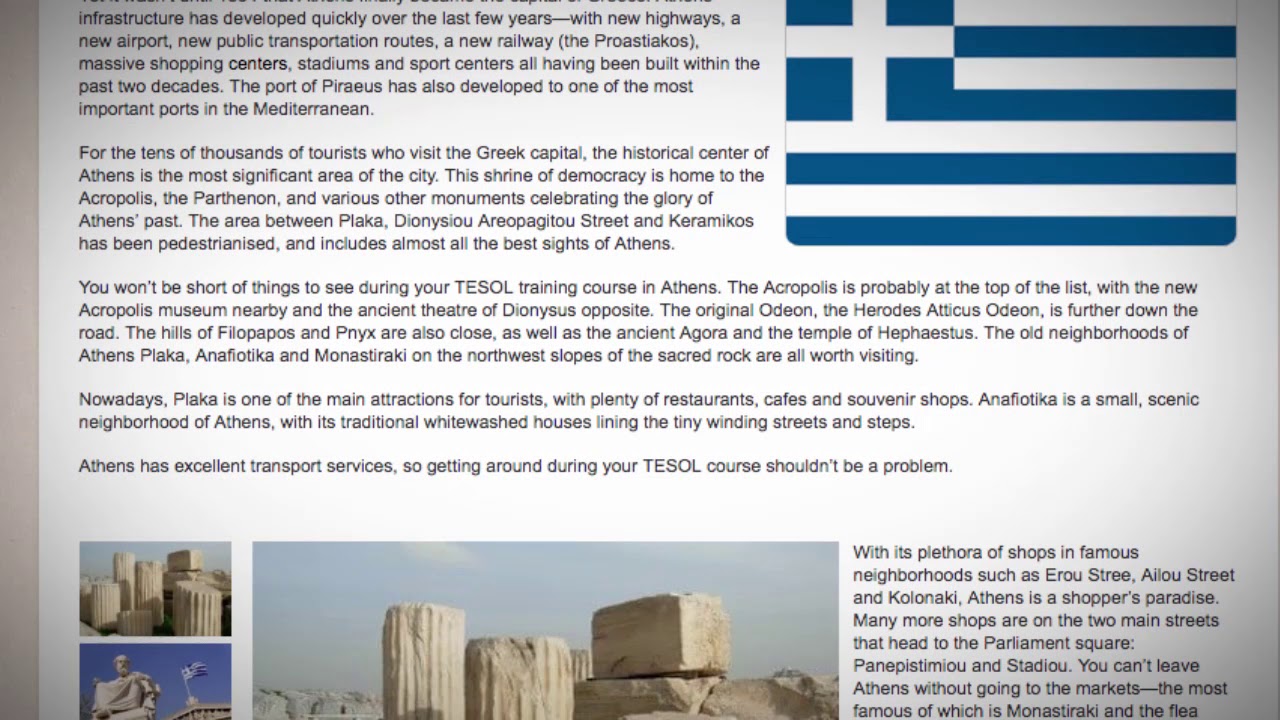 Athens is packed full of history and its origins can be traced back over 3,000 years. Yet it wasn’t until 1834 that Athens finally became the capital of Greece. Athens’ infrastructure has developed quickly over the last few years—with new highways, a new airport, new public transportation routes, a new railway (the Proastiakos), massive shopping centers, stadiums and sport centers all having been built within the past two decades. The port of Piraeus has also developed to one of the most important ports in the Mediterranean.

For the tens of thousands of tourists who visit the Greek capital, the historical center of Athens is the most significant area of the city. This shrine of democracy is home to the Acropolis, the Parthenon, and various other monuments celebrating the glory of Athens’ past. The area between Plaka, Dionysiou Areopagitou Street and Keramikos has been pedestrianised, and includes almost all the best sights of Athens.

You won’t be short of things to see during your TESOL training course in Athens. The Acropolis is probably at the top of the list, with the new Acropolis museum nearby and the ancient theatre of Dionysus opposite. The original Odeon, the Herodes Atticus Odeon, is further down the road. The hills of Filopapos and Pnyx are also close, as well as the ancient Agora and the temple of Hephaestus. The old neighborhoods of Athens Plaka, Anafiotika and Monastiraki on the northwest slopes of the sacred rock are all worth visiting.

Nowadays, Plaka is one of the main attractions for tourists, with plenty of restaurants, cafes and souvenir shops. Anafiotika is a small, scenic neighborhood of Athens, with its traditional whitewashed houses lining the tiny winding streets and steps.

Athens has excellent transport services, so getting around during your TESOL course shouldn’t be a problem.

With its plethora of shops in famous neighborhoods such as Erou Stree, Ailou Street and Kolonaki, Athens is a shopper’s paradise. Many more shops are on the two main streets that head to the Parliament square: Panepistimiou and Stadiou. You can’t leave Athens without going to the markets—the most famous of which is Monastiraki and the flea market. Also worth a visit are the Athens markets on Athinas Street and the small shops on Evrypidou Street.

Athens is also the site of a wide variety of great food options. From local ethnic cuisine in the souvlaki shops, to international grill houses and pizzerias, Athens houses the whole lot.

There are numerous beaches in Athens and on the peninsula of Attica. Most popular are the beaches in Vouliagmeni, Varkiza, Kavouri, Glyfada, with Alimos the nearest to the centre of Athens. On the east coast of Attica, there are many sea resorts very popular among the Athenians with plenty of pleasant beaches.

Why choose Athens? TEFL International Athens is conveniently located near Athens University campus in the Ilisia/ Zografou area of downtown Athens. Athens is one of the most ancient cities in the world. Often called the cradle of civilization and the birthplace of democracy, it also includes a buzzing modern metropolis, with an excellent public transport system, entertainment facilities and vibrant nightlife. The Acropolis is a UNESCO world heritage site and is described in Patricia Shultz’s, 1,000 Places to See Before You Die as the most important ancient monument of the Western world. Coastal resorts like Glyfada are within easy reach. The port of Piraeus is just 30 minutes on the metro, enabling trips to the spectacular Greek islands and even more world heritage sites such as Rhodes and Delos and several more of Patricia Shultz’s 1,000 Places to See Before You Die such as Mykonos, Santorini, Patmos, Symi and Hydra.

Find out more about taking a TEFL course in Athens here: https://www.tesolcourse.com/tesol/greece-athens/?cu=YTDESCRIPTION