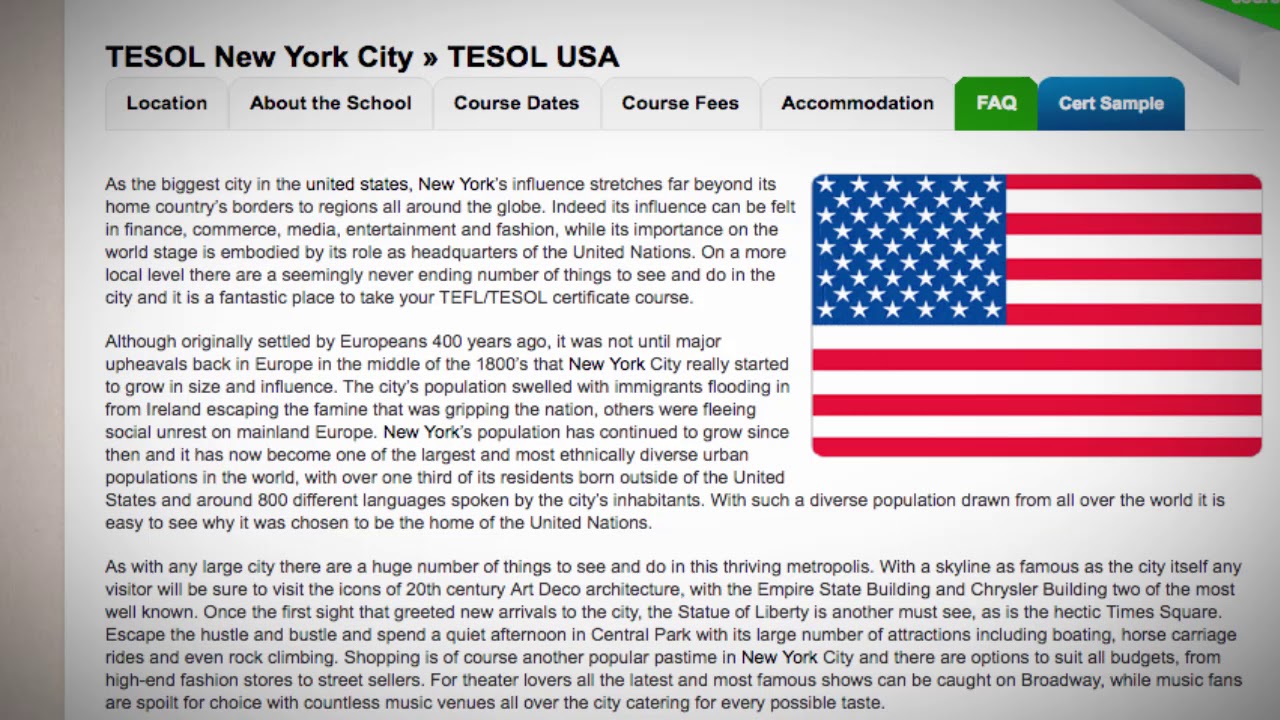 As the biggest city in the united states, New York’s influence stretches far beyond its home country’s borders to regions all around the globe. Indeed its influence can be felt in finance, commerce, media, entertainment and fashion, while its importance on the world stage is embodied by its role as headquarters of the United Nations. On a more local level there are a seemingly never ending number of things to see and do in the city and it is a fantastic place to take your TEFL/TESOL certificate course.

Although originally settled by Europeans 400 years ago, it was not until major upheavals back in Europe in the middle of the 1800’s that New York City really started to grow in size and influence. The city’s population swelled with immigrants flooding in from Ireland escaping the famine that was gripping the nation, others were fleeing social unrest on mainland Europe. New York’s population has continued to grow since then and it has now become one of the largest and most ethnically diverse urban populations in the world, with over one third of its residents born outside of the United States and around 800 different languages spoken by the city’s inhabitants. With such a diverse population drawn from all over the world it is easy to see why it was chosen to be the home of the United Nations.

As with any large city there are a huge number of things to see and do in this thriving metropolis. With a skyline as famous as the city itself any visitor will be sure to visit the icons of 20th century Art Deco architecture, with the Empire State Building and Chrysler Building two of the most well known. Once the first sight that greeted new arrivals to the city, the Statue of Liberty is another must see, as is the hectic Times Square. Escape the hustle and bustle and spend a quiet afternoon in Central Park with its large number of attractions including boating, horse carriage rides and even rock climbing. Shopping is of course another popular pastime in New York City and there are options to suit all budgets, from high-end fashion stores to street sellers. For theater lovers all the latest and most famous shows can be caught on Broadway, while music fans are spoilt for choice with countless music venues all over the city catering for every possible taste.

Wherever you are from there is something for you in New York City, whether you like to spend your time seeing the sights or watching the latest Broadway spectacular you will not be disappointed in New York. When it comes to study time our trainers are here to help you finish the course feeling well prepared for your first job as a qualified English teacher. With all this in mind it is easy to see why our New York City TEFL/TESOL course is one of our most popular courses year after year.

Find out more about taking a TEFL course in New York here: https://www.tesolcourse.com/combined-tesol-courses/usa/new-york-city-new-york/?cu=YTDESCRIPTION