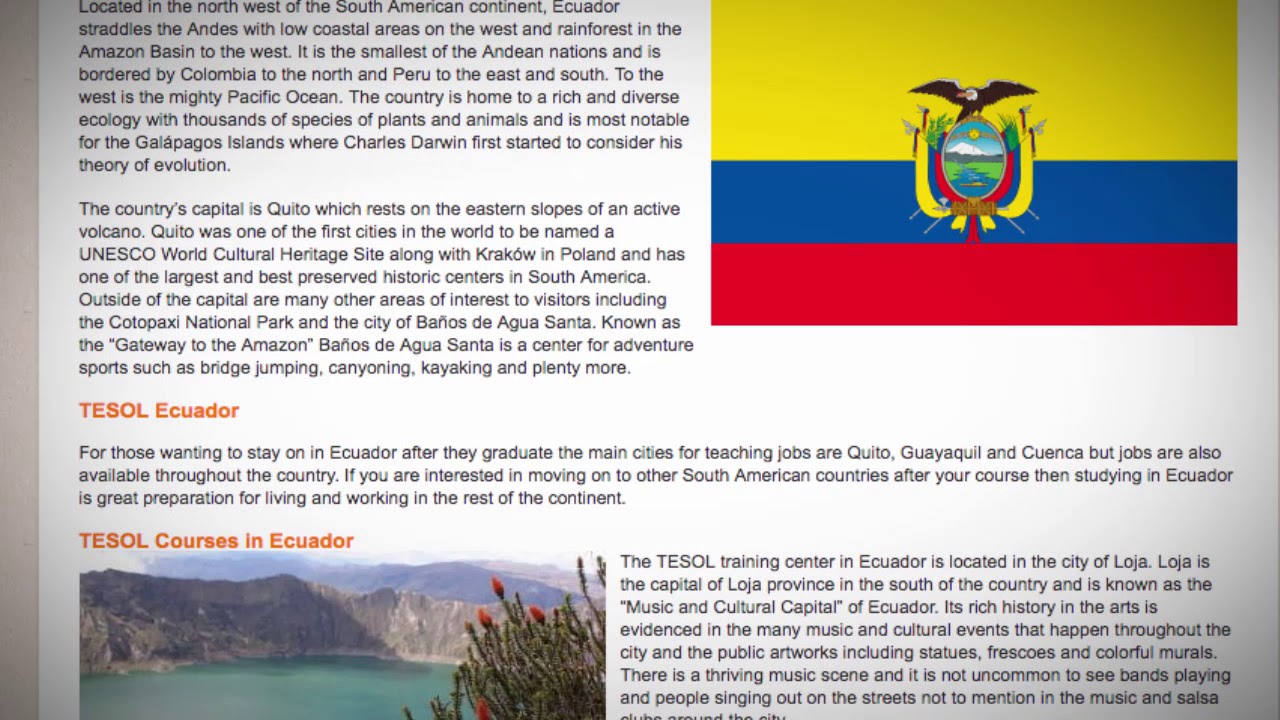 Located in the north west of the South American continent, Ecuador straddles the Andes with low coastal areas on the west and rainforest in the Amazon Basin to the west. It is the smallest of the Andean nations and is bordered by Colombia to the north and Peru to the east and south. To the west is the mighty Pacific Ocean. The country is home to a rich and diverse ecology with thousands of species of plants and animals and is most notable for the Galápagos Islands where Charles Darwin first started to consider his theory of evolution.

The country’s capital is Quito which rests on the eastern slopes of an active volcano. Quito was one of the first cities in the world to be named a UNESCO World Cultural Heritage Site along with Kraków in Poland and has one of the largest and best preserved historic centers in South America. Outside of the capital are many other areas of interest to visitors including the Cotopaxi National Park and the city of Baños de Agua Santa. Known as the “Gateway to the Amazon” Baños de Agua Santa is a center for adventure sports such as bridge jumping, canyoning, kayaking and plenty more.

TESOL Ecuador
For those wanting to stay on in Ecuador after they graduate the main cities for teaching jobs are Quito, Guayaquil and Cuenca but jobs are also available throughout the country. If you are interested in moving on to other South American countries after your course then studying in Ecuador is great preparation for living and working in the rest of the continent.

The TESOL training center in Ecuador is located in the city of Loja. Loja is the capital of Loja province in the south of the country and is known as the “Music and Cultural Capital” of Ecuador. Its rich history in the arts is evidenced in the many music and cultural events that happen throughout the city and the public artworks including statues, frescoes and colorful murals. There is a thriving music scene and it is not uncommon to see bands playing and people singing out on the streets not to mention in the music and salsa clubs around the city.

Find out more about taking a TEFL course in Ecuador here: https://www.tesolcourse.com/tesol/ecuador/?cu=YTDESCRIPTION