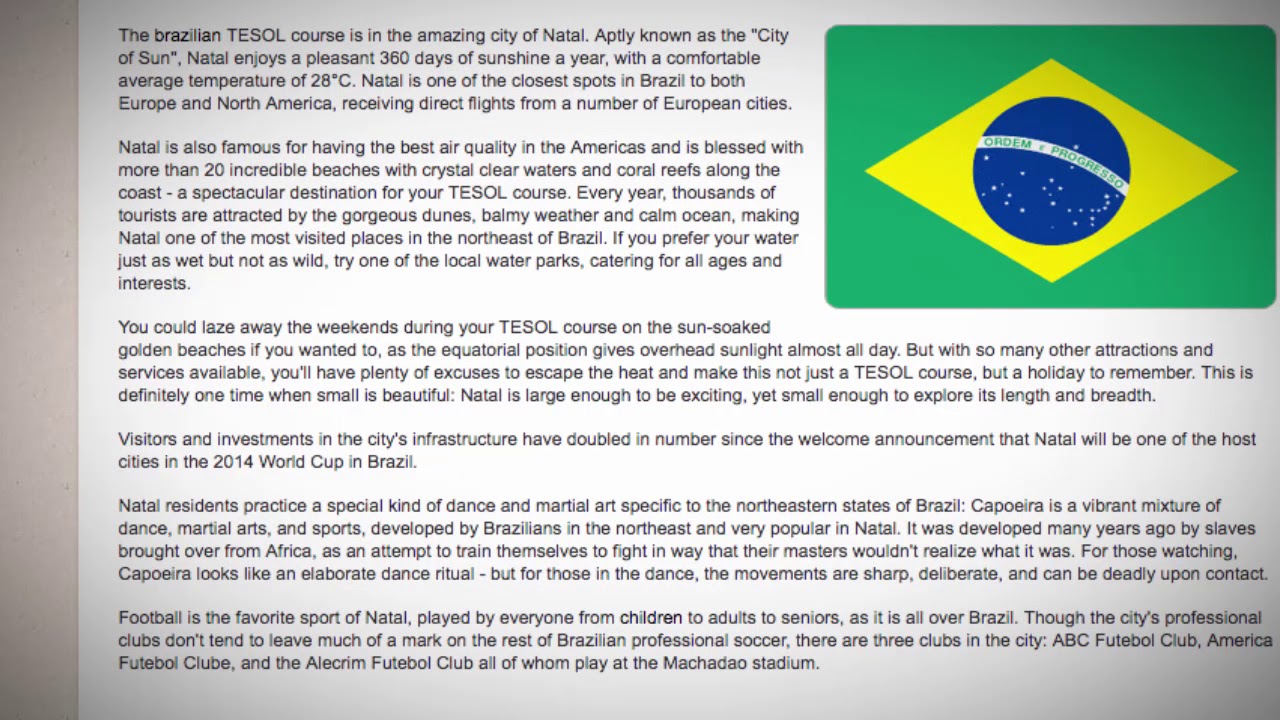 The brazilian TESOL course is in the amazing city of Natal. Aptly known as the “City of Sun”, Natal enjoys a pleasant 360 days of sunshine a year, with a comfortable average temperature of 28°C. Natal is one of the closest spots in Brazil to both Europe and North America, receiving direct flights from a number of European cities.

Natal is also famous for having the best air quality in the Americas and is blessed with more than 20 incredible beaches with crystal clear waters and coral reefs along the coast – a spectacular destination for your TESOL course. Every year, thousands of tourists are attracted by the gorgeous dunes, balmy weather and calm ocean, making Natal one of the most visited places in the northeast of Brazil. If you prefer your water just as wet but not as wild, try one of the local water parks, catering for all ages and interests.

You could laze away the weekends during your TESOL course on the sun-soaked golden beaches if you wanted to, as the equatorial position gives overhead sunlight almost all day. But with so many other attractions and services available, you’ll have plenty of excuses to escape the heat and make this not just a TESOL course, but a holiday to remember. This is definitely one time when small is beautiful: Natal is large enough to be exciting, yet small enough to explore its length and breadth.

Visitors and investments in the city’s infrastructure have doubled in number since the welcome announcement that Natal will be one of the host cities in the 2014 World Cup in Brazil.

Natal residents practice a special kind of dance and martial art specific to the northeastern states of Brazil: Capoeira is a vibrant mixture of dance, martial arts, and sports, developed by Brazilians in the northeast and very popular in Natal. It was developed many years ago by slaves brought over from Africa, as an attempt to train themselves to fight in way that their masters wouldn’t realize what it was. For those watching, Capoeira looks like an elaborate dance ritual – but for those in the dance, the movements are sharp, deliberate, and can be deadly upon contact.

Football is the favorite sport of Natal, played by everyone from children to adults to seniors, as it is all over Brazil. Though the city’s professional clubs don’t tend to leave much of a mark on the rest of Brazilian professional soccer, there are three clubs in the city: ABC Futebol Club, America Futebol Clube, and the Alecrim Futebol Club all of whom play at the Machadao stadium.

ou will probably want to visit the Fort of Holy Kings some time during your TESOL course in Brazil. Natal’s star-shaped fort, which still contains some old cannons, was built by Portuguese settlers in 1598, close to where the Potengi River meets the Atlantic Ocean.

The Natal tourism center is a fascinating former prison. A handicrafts fair contains an art gallery of wooden, fabric and glass, showing the region’s history through popular culture evolution. Another attraction is “Forro con Turista”; a show with regional music every Thursday.

You certainly won’t be bored during your TESOL course in Natal, Brazil!

Fun Natal facts
Natal is home to the largest cashew tree in the world. The tree is 500 meters around and takes up 7200 square meters of space, making it 70 times larger than a normal cashew tree! The word “Natal” means Christmas in Portuguese! Natal is home to Clodoaldo Silva, the greatest Paralympic swimmer in the world; in 2000, he won three silver medals and one bronze, and in 2004 he won six gold medals and one silver. At the same time, he managed to set four world records in swimming! In 2005, an official survey of the country identified Natal as the safest capital city in Brazil.

Find out more about taking a TEFL course in Natal here: https://www.tesolcourse.com/tesol/brazil-natal/?cu=YTDESCRIPTION